In our efforts to inspire more young people into the world of Wearable Technology and with the support of The Institute of Engineering and Technology, we had our first ‘Wearable Tech Workshops’ to students in North Somerset.

The first of five workshops took place at Portishead Library, who kindly sponsored the room, over the February half term of 2020.

We were pleased to see students from across North Somerset secondary schools for a three hour workshop. The students made a variety of things, including electronic badges, hair bands, light up pockets, etc.

It was a productive morning and I hope to welcome more new students to future workshops.

Due to the Corona virus situation, the workshops have been postponed until further notice.

I recently delivered four sessions to a large group of Yatton students who signed up to learn how to make games with Bitsy. This was part of Yatton School’s extracurricular activities.

I was confident that introducing the Bitsy game-maker tool to primary school children would work, but I wasn’t 100% certain the children were going to like it. Well, they absolutely loved it!

Bitsy is a great tool to create games where the characters can be designed in a squared 8 x 8px grid. We talked a lot about pixels and the children created some fantastic avatars and characters with which they could interact.

The children learnt the principles of game design and created small worlds, puzzles and challenges for their avatars to navigate.

You can move around one of the games which was created by a Year 5 pupil here by pressing your keyboard arrow keys.

Here are just a few examples of some of the students’ creations.

Here’s a video of one of the games created by the youngest member of the group – a 7-year old child.

During the final term of the school year and as part of Yatton Junior School Learning College, I led a group of children through four sessions looking at some basic electronic principles and ‘how electricity works’.

The children learnt about electronic circuits and how to make them using copper tape. Once they grasped the principles, the children were able to design their own circuits with LED’s… and make them light up.

Copper tape works really well with paper but there were the inevitable connection problems. However, the children used a multimeter to debug their circuits.

The children made a house out of paper that lights up… and also made pop-up greetings cards.

I was very pleased to hear that some of the children had later used batteries to test their circuits at home, so a big ‘thank you’ to the parents who helped with their child’s requests!

Paper circuits give children a great introduction to physics and I’m looking forward to repeating the experience.

If you would like a Paper Circuits workshop at your school, get in touch.

I was delighted to be given the opportunity to run two coding workshops for primary school children at Portishead library at the start of the Easter break.

I planned the workshops – ‘Make a Minecraft Game’ and ‘Make a Pokémon game’ in Scratch – to challenge the children. I created two levels of difficulty, which meant the more advanced coders were able to create a scrollable platform game.

I only wished we had had a bit more time to go through some more coding challenges.

Thank you to all the staff at Portishead library staff for their support. We will be back soon.

If you would like a workshop at your school in Portishead – please do get in touch.

We recently had great fun delivering a ‘squishy circuits’ workshop at Yatton Infant School. This workshop was designed for Key Stage 1 children, and as part of their STEM extra curriculum activities.

I loved the fact that the children were very keen to understand about LEDs, quickly learnt about their ‘polarity’, and applied this effectively on every single project they made.

Play dough is an excellent material for introducing the children to the world of electronics and we certainly had four playful (and messy) afternoons.

Here is a sample of what the children created: 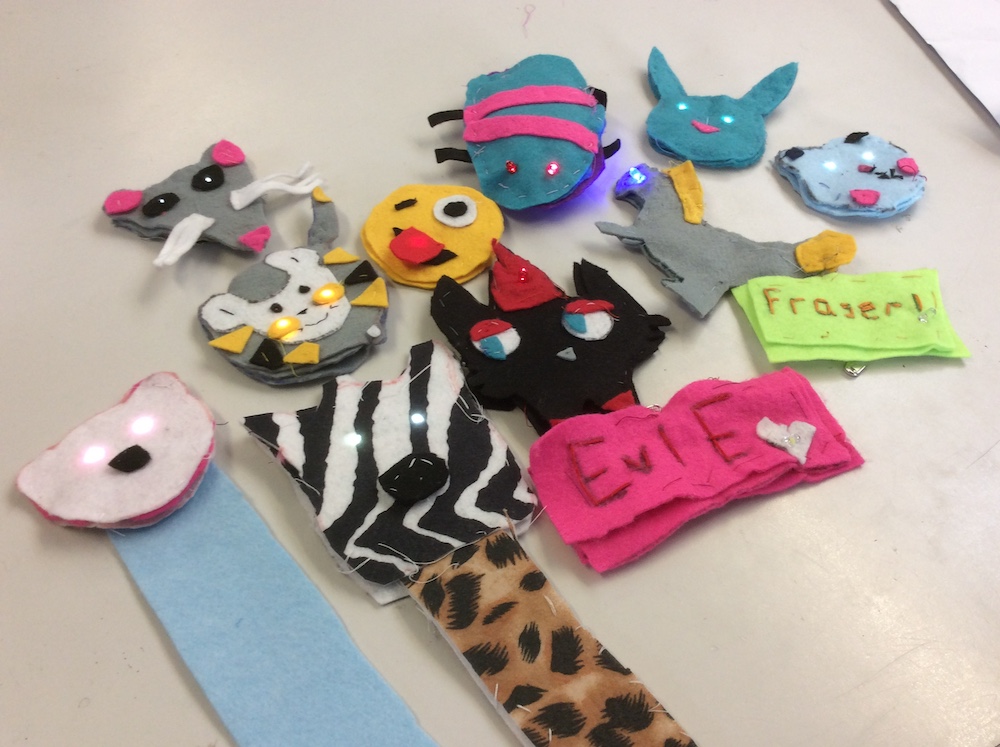 I had the opportunity again to run some e-Textiles workshops at Yatton School as part of their Learning College programme.

This time I had twelve children – a mix of boys and girls from Year 4 to Year 6.

The brief for the children was to make a project with felt… and it had to have at least one LED that lit up with a switch. I showed the children some examples, which they used as inspiration. However, most of the children decided to make something  different and we then embarked on a project that had to be designed and executed over four 90-minute sessions.

The children had to think very carefully about their designs and how the electronic components were going to fit perfectly. This thought process wasn’t easy, but once the children understood the constraints of their design, they were great at adapting them.

Once the design was put into the fabric, it was time to think about the electronic circuit – an opportunity to learn about electricity and basic electronics.

Only a handful of the children had ever done any sewing before, which meant they had to learn the basics before embarking into sewing their electronic circuit into their fabric.

With the electronic circuit in place, it was time to put the final touches to their projects… with a little bit more sewing needed to finish off their designs.

Every single project was created with a lot of thought and care. I’m so proud of every child that participated, not only did they create something very personal, but something they will appreciate and use. It was a real labour of dedication, concentration and hard work. Well done Yatton School children 🙂

We held some very successful coding workshops for primary school children at the offices of Viper Innovations in Portishead over the Autumn half-term.

Our hosts made their fantastic boardroom available to us for three mornings during a normal working week. The children turned up with their laptops and learnt to code a spooky game in Scratch, made a Minecraft zombie game, and learnt how to code the micro:bit.

The Minecraft zombie game in particular was a real hit with the children and there was a real buzz in the room with everyone adding their own ideas to the game.

The children had an opportunity to show-off their projects with a ‘show and tell’ at the end of each of the sessions. The grown-ups present were very impressed with their creations.

Thank you to all the parents that let their children attend the sessions – and a special thanks to those who supported their children during the workshops.

Finally, a big *thank you* to Viper Innovations staff for their support with the workshops and to their STEM ambassadors who were of great help – including the ‘magician’!

We hope to repeat the experience again next year!

What parents told us was the best thing about the workshops:

“My son loved everything about this workshop”

“The boys hadn’t used the micro:bit before, so it gave them a new experience in coding in a relaxed atmosphere.”

“Flexibility to fit all ages and abilities”

“My son was engaged and excited… he’s looking forward to attending again.”